On 23 April 1947 the cargo ship Samtampa en route to Bristol foundered in the Bristol Channel on Sker Rocks. The Mumbles Lifeboat was launched in an attempt to effect a rescue of the crew. The Samtampa broke up and all the crew lost their lives as did the crew of the Mumbles Lifeboat. Total loss of life was 47 souls. This was one of the great sea tragedies of the Porthcawl coast and many of the deceased are buried in Porthcawl cemetery

To commemorate the 60th. anniversary of the disaster, local organisations planned a commemoration service on Sker Rocks and to unveil a dedicated plaque at the scene. Members of the public attending would need to park their vehicles at Rest Bay and walk a distance of 1.5 miles along the foreshore. This area of foreshore had not been cleaned for many years and a considerable amount of debris, jetsam, flotsam and litter had accumulated in that time. As a contribution to the commemoration Porthcawl Lions Club organised a clean up of the entire 1 .5 miles of foreshore over the period 13th to 21 st April 2007, ready for the memorial service. By the time of the memorial the foreshore was in an immaculate condition.

Following that success the Lions Club have worked with Bridgend County Borough Council, Keep Wales Tidy, and the Marine Conservation Society and various local organisation and people to keep the beach clean. We have been instrumental in arranging for 4500 primary school children in the borough to experience the MCS ‘Cool Seas’ roadshow and arranging for the local ‘KPC Youth’ group to adopt Pink Bay in the MCS ‘Adopt a Beach’ scheme.

An annual beach cleaning programme is now produced by BCBC and our aim is to get as many locals as possible to turn up to keep this beautiful part of the foreshore free of debris.

Pictured here are the Porthcawl Lions and helpers in the early initiative in Beach Cleaning. Tons of  rubbish was removed from Sker and Pink Bay 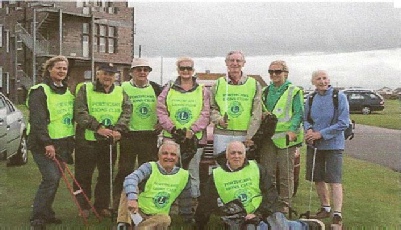